“The windows of your locomotive are stained glass, spilling panes of
lush colour across you. In the High Wilderness, the light of the stars is
enchanting. Looking too long can stir consuming obsessions, or wild
fascinations. The coloured glass offers some small defence.”

Queen Victoria has brought London into the heavens. The High Wilderness stretches out ahead of you; cruel, unwelcoming, and filled with opportunity.

Here you make your living as a Skyfarer, working on board a locomotive jury-rigged to fly through these cold skies and raging winds. Your captain has taken you to the Reach, a frontier on the edge of civilisation, in search of fame, fortune and adventure.

You will change out here, where the Empire’s light falters and casts deep shadows, where rebels stake their claim on fragments of sky-rock riddled with fungus, where pillagers dig into ruins built by the now-dead sun.

Players form the crew of a spacefaring steam locomotive. Gunners, quartermasters, engineers, signallers – even mascots – are brought to the fore as the Captain is struck down by misfortune and the crew must band together to get out of (or into) many surprising kinds of trouble.

Using a simple dice-based system, Skyfarer allows players and gamemasters to easily tell stories set in the Fallen London universe with plenty of climactic moments, tense stand-offs, and grim decisions. As characters risk life and limb, they’ll accrue Peril – the more Peril they have, the greater the chance of them meeting a grisly and permanent end.

Luckily, things are made easier by spending Tenacity – a resource earned by acting in accordance with your character’s drives and beliefs. But how will those integrities change, now you’re out on the frontier of Victoria’s Empire?

Originally released in September 2018 to accompany the PC, Mac and Linux game Sunless Skies, Skyfarer is set in the Fallen London universe. It was written by Grant Howitt and Chris Taylor of Rowan, Rook and Decard, with narrative direction by Chris Gardiner of Failbetter Games. The additional story supplement is by Chris Gardiner.

Thanks to player Lucky Red Seven for making a version of the character sheet which you can fill in digitally!

Skyfarer is a free trpg set in the same universe as Fallen London. It's 21 pages with nice art, solid layout, and excellent graphic design. It also comes with Sky-Stories---a free supplement with additional npc, location, and event hooks---making this a total of 26 pages of professional material in an established universe at no cost to readers.

It's hard not to recommend it on that alone, but even if you're new to Fallen London or new to trpgs, this is an excellent entry point. The book leads with really good basic advice for getting started with a pen and paper rpgs, and the game is built to ensure that you never accidentally get rolling without a compelling adventuring hook in play.

Less information is provided on the Fallen London setting, so you may want to at least check out Sunless Skies first, but as long as your GM is a bit familiar with it, or as long as you agree as a group not to worry if one of you makes up a thing that contradicts canon, you should be fine. When in doubt, just kind of assume The Phantom Tollbooth but it's Dark Souls and also steampunk, and you'll be pointed in the right direction.

Mechanically, Skyfarer is pretty straightforward. You roll d10 against a target number (usually 6,) and add in small bonuses or penalties based on stats and effects. Failure means you take Peril, which builds up until you roll lower than it and get taken out of action. Roleplaying your character in a way that gets you into trouble builds up Tenacity, which can be used to buy down Peril, but also the GM is encouraged to just throw free heals at everyone every so often to keep the Peril accumulation from getting out of hand.

If you're used to the balance and gameflow in something like Fate or PbtA, you should be comfortable here.

One thing Skyfarer doesn't quite do is capture the way player language-learning works with the Fallen London games. In Sunless Sea, for example, when you're starting out, you're routinely asked to make decisions based on words and terms you don't have context for. As you play, you slowly learn what the terms mean, and you eventually start going on high alert when you hear a new word or an old word in a new context. In Skyfarer, the difficulty curve isn't tied in any way to learning the lore---which is probably for the best.

Another minor note is that Skyfarer goes through some weird hoops re: the captain of your flying train. The captain is a GMPC role, players can't play them, but they're also required by the rules to be out of commission, leaving important decision-making to the crew. This creates a weird dynamic, where the characters naturally want to look for guidance to someone who isn't allowed to give it, and I would strongly recommend either playing the crew as a captainless collective, allowing a player captain, or picking the "the captain is a collective hallucination" option to offset this.

Overall, though, Skyfarer is a solid, easy-to-learn game that's been dunked in the lore of Fallen London. If you're new to trpgs, or to non-d20 stuff, or if you like the Fallen London universe or simple, character-focused games, I would recommend both Skyfarer and the accompanying Sky-Stories supplement to you.

-Page 14, if a character with high peril succeeds a check but ends up in Danger anyway, does this cancel their success?

I take it as that they succeed but may potentially pay with their life. After all, they succeeded

Also, excellent review. I have the same opinion about captains and the notion of them having to be out of commission. Working in a homebrew where a party eventually gets their own locomotive and keep a collective captainry

How many players is this game recommended for?

It's pretty flexible, given that it's for one-off or short campaign play. You'll need a crew's worth - but a crew could mean two!

Lovely small Pen & Paper system! Played some one shots with friends of mine and we had a blast, even if they have no Idea of any Fallen London content :D

so you cant use this system for fallen london? Its just the sky part of the story? Cause TBH i much much prefer the worldbuilding of the underground and the unterzee.

There is nothing at all to stop you! The skies (hoho) are the limit. It works best when you're a team of people, so it's easiest to transfer to Sunless Sea, but a Fallen London expedition or similar would also work. It's up to you. :) 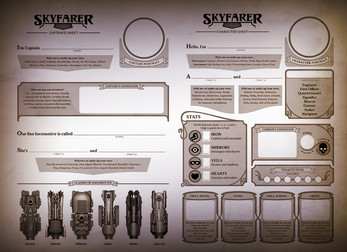 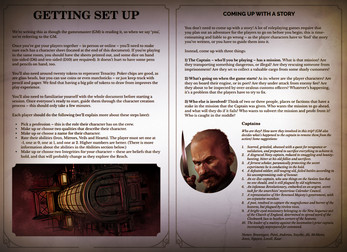 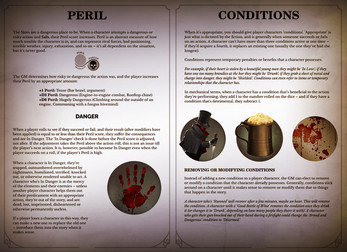